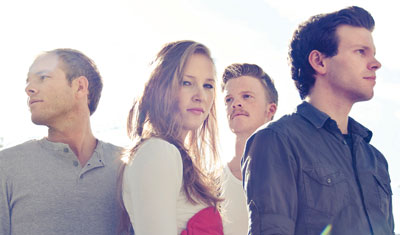 “Reminder” is the debut release by the most exciting band to come out of the insanely active Norwegian jazz scene in recent memory. In a country where jazz talent seems to seep out through the tap water, that’s saying a lot! Pixel combine the sounds of the classic, piano-less, ‘modern Jazz’ quartet lineup of sax, trumpet, bass and drums (think Ornette Coleman, Gerry Mulligan etc.) with the energy and attitude of indie rock (all of the players are 25 or younger). Led by bassist and vocalist Ellen Andrea Wang, Pixel has been together for 2 years. Also featured are drummer Jon Audun Baar, saxist Harald Lassen and trumpeter Jonas Vemøy. The players are all very active on the Scandinavian jazz scene, as is Pixel themselves. Like similarly forward thinking groups like The Bad Plus, this is definitely jazz, but it’s jazz that rock audiences can relate to, and it has great cross-over potential.

Bass player and singer Ellen Andrea Wang (25 years) comes from a musical family in Søndre Land and started to play classical violin and piano before she picked up the double bass at the age of 17. Bjørn Kjellemyr has been her bass mentor at the Norwegian Acadamy of Music in Oslo. She got her big breakthrough in 2010 with the album “Norwegian Song 3″, she was featured as one of the ”new” big bassists in Norway playing with legendary musicians as Dag Arnesen, Pål Thowsen and Palle Mikkelborg. She is playing in progressiv rock bands like Synkoke and White Willow and with pop singer Thea Hjelmeland. Ellen has contributed to over 10 cd records with various artists. In 2011 she received 2 talent prices (Dølajazz talentprice and DNB, norwegian bank cultural price) for her talent.

Harald Lassen (24 years) is a saxophone player from Songdalen, south of Norway. He started to play piano and sing at early age based in the gospel tradition.At the age of 13 he started to play saxophone and continued to study jazz with teachers Morten Halle and Fredrik Ljungkvist. During the last 4 years he has been working with he’s own band and he is selected with two of he’s own bands to the big norwegian jazz competition JazzIntro 2012. Harald has worked with big jazz profiles like Andrew D` Angelo, Mathias Eick and Ralph Alessi. He’s break through came in 2012 with his band Play Tell, consisting of, among others, the legendary drummer Jon Christensen and the internationally renowned bass player Mats Eilertsen.

Jonas Kilmork Vemøy (25 years) is a Norwegian trumpet player born in Oslo and grew up in Larvik in Vestfold, Norway. Jazz education with teachers Eckhard Baur and Torgrim Sollid in the Norwegian Academy of Music, 2007-2011. He has worked with the pop/rock-band Lama, created by Nils Martin Larsen (ex Jaga Jazzist), among others. Jonas has proven himself as a talented jazz trumpeter on stage and as a studio musician. He’s been playing at jazzfestivals like Århus jazzfestival, Moldejazz and has contributed on several recordings with many bands and artists over the past years, both in and outside Norway, such as Lama, Kristin Minde, Blokk 5, Captain and Me, and Gary Go.

The drummer Jon Audun Baar (25 years) is from Tomter, outside of Oslo. He has studied jazzdrums at the Norwegian Academy of Music with teachers like Jon Christensen and Rune Martinsen. He has played on several jazzfestivals in Norway as Moldejazz, Oslo jazzfestival and Dølajazz with many different bands and artist. He plays in the the critically acclaimed trio Eberson/Baar/ with internationally jazz-guitar legend Jon Eberson.